So Mr Cheeks is back at it again! This time sharing his recipe he calls “Magic Booty Treat Mix”…He sends the incredibly sexy Angela to the store to pick up the ingredients needed to create his heinous fast scat producing concoction. (Which by the way he swears by and says it actually works lol The actual recipe is posted if you wanted to have a look at it, and check it out) She shows up in a pair of jean shorts with her huge butt cheeks out ready to get down and dirty, sucking on a giant cock lollipop. I am actually Bi, and I have to admit Angela is super hot and I am totally attracted to her. Her butt is so big and juicy but above all she has a very cute and pretty face, which to me is most important 🙂 Anyway she almost as soon as she gets into the room wastes little time and she pees into his mouth where he downs and swallows every single gulp…HOT. She then empties her shopping bag and makes the mix in a blender and then drinks it down. While shes waiting for it to kick in shes in the mood to suck some actual dick and gets to work. When its time to finally release what her body has made Mr Cheeks is right there licking her wide open juicy red butt hole, ready to receive all she can give him. He then sticks the dick lollipop in her asshole and fucks her with it and she farts a couple of big long rumbles directly into his mouth. lol He ultimately spits it into a cup with a spoon where he actually then proceeds to feed it to the beautiful Angela. Where she would for the first time ever taste scat in her life, she seemed to be totally turned on by it and almost in a sexual trance of some sort as she swished it in her mouth and swapped it back and forth in a kiss with Mr Cheeks. She did gag a few times although he asks her how it tastes and she says surprisingly not bad. After she said that he then tells her to swallow what is in her mouth and she actually complies and swallows some shit! This was a SUPER hot scene, full of total erotic scat bliss. She then goes on to feed Mr Cheeks by spoon all that is left which he happily and eagerly eats and swallows mouthful after mouthful. At this point with a belly full of scat you can tell he is totally in animal mode as he fucks her face and kisses her some more exchanging shitty mouthfuls of saliva. As she chokes on his throbbing nice dick he unloads and dumps a massive cum explosion all over her face and in her mouth…I have to say I was extremely wet by the time I got to the end of this video and this fetish is really beginning to pique my curiosity 🙂 Go watch this movie confidently and go forth prepared for a massive orgasm and a very satisfactory finish! I believe this is also his longest movie production yet to date. 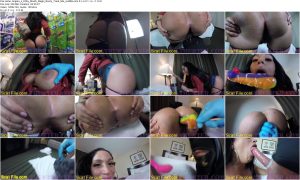