Saya Takazawa is traveling all over the country for her travel blog, but along with it, she visits some of her avid fans to give them the thanking they deserve! In this scenario, the actress is on her second fan and she makes sure to make her visit worthwhile! She begins with taking off her panties and peeing on the guy’s face and into his mouth, making him drink her piss! When she could no longer release any more, she proceeds to strip completely naked and get intimate with the man! They press their lips together and kiss, but it doesn’t take long before the actress puts a plate on the man’s stomach where she proceeds to start defecating! She pushes as much poop as she can out of her rectum, and when she could no longer release any more, she puts a couple of lighted candles on her masterpiece! Though, it doesn’t end there! The more interesting part begins with the lady smearing her filth all over their bodies! From her chest all the way down to her thighs, the woman gets covered with her own poop and the same happens to the man! She even puts feces on her face before the two resume getting intimate! Covered with feces, they slobber all over one another’s mouth, the guy sucks the actress’ tits, and she later concentrates her attention on his dick by performing a blowjob until he cums inside her mouth! 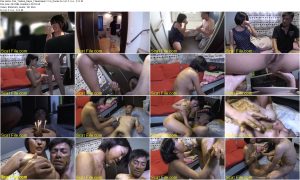